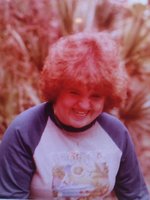 Peacefully, in her sleep, Peggy Welter passed away in her 57th year.

Peggy recently moved back to London after spending 10 years in Sarnia. She has always kept in touch with her childhood friend Monique from London & she will miss her deeply.

Peggy has been cremated at her wishes and will forever be with Mom & Dad at Woodland Cemetery.

Donations in Peggy’s memory can be made to the Heart & Stroke Foundation.

Online condolences can be expressed at www.woodlandcemetery.ca