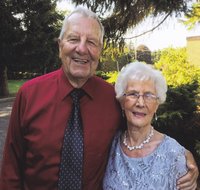 It is with great sadness, yet filled with cherished memories that the family of InaBelle Benjamin (nee Gibson) announce her passing on March 25th, 2021. Wife of Ken "Benny" Benjamin for 65 years, together they raised five children and numerous beagles; Luanne (Kevin) McCarthy, Kelly (2013) (Rick) Benjamin-Smith, and "the boys" - Jay, Guy and Cole Benjamin. InaBelle was a loving Grandma to Tara (Nick) Sylvestre, Bobby Pinnell, Kyle (Amanda) Benjamin and Cassie Benjamin, Great Grandma to Weston, Emma and Reagan. Sister to David and Brent Gibson and sister in law to Pat Benjamin. InaBelle was all about her family. Loving, encouraging & supporting each of us throughout our lives. Mom was born September 18th, 1935 on the Gibson family farm in Drew, Minto Township and was raised by her Grandmother Namie & Father Elvin. InaBelle met Ken at a dance in 1955. Later that night she told her Aunt that she had met her husband. They celebrated their 65th wedding anniversary on February 4th, 2021 alone, but together during these Covid times. InaBelle was pre-deseased by her daughter Kelly Lynn (2013), brother George Gibson and sister Dianne Hymers. InaBelle taught elementary school mainly in Listowel until Kelly was born. She then stayed home as a wonderful, full time Mother to her children. The Benjamins moved to London in 1968. Once the children were all in school she worked the order desk at Silverwoods / Ault Dairies. For years, Ken and InaBelle loved to travel. They were amoung the few fans to accompany the Canadian team to Russia during the 1972 Canada / Russia series. After retirement, they spent 25 winters together in Florida surrounded by friends and family there. To the many friends and family who have loved & supported Mom, Dad & all of us through our Mother's illness - we thank you. A special thanks to the Arleins, the Rooks', the Justices' and Paul Domm. When Mom was told she was terminal she said; "Well, I guess I can have a cup of tea with Kelly". They are together now. InaBelle was described by a very close friend as "truely the lovliest, kindest person I have ever met, a true lady." This sentiment was echoed by all who knew her. She will be truely missed. A celebration of InaBelle's life will be arranged when circumstances permit.