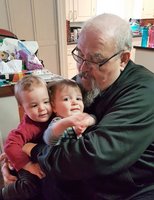 After graduating from London Central Secondary School, Mike won his dream placement to Kettering University in Flint, Michigan where through a co-op program he became an industrial engineer. During that time, the 6-foot 2-inch basketball fan played intramural basketball and followed the annual “NCAA March Madness” American men’s basketball tournaments.

Mike’s career began at GM Diesel, a London-based manufacturing plant for railway diesel locomotives that also fuelled his lifelong interest in trains. During his 25 years there, he was often sent to other factories across North America to conduct engineering studies and tests. After leaving GM, Mike continued to work in the automotive industry, where he nurtured his love of classic and sports cars.

In his personal life, Michael translated a passion for music into opera, and his professionally trained tenor echoed in choirs and concerts around Ontario. He was an enthusiastic gardener and cook – talents he passed along to his children and grandchildren. His gardens ranged from massive plots out in the country to a container garden on his balcony. And he instilled a love of nature in his children, who were encouraged to “play in the dirt.” The kids learned to appreciate flora and fauna, feed the birds and enjoy pet finches and bunnies. As members of Scouts Canada, they spent considerable time outdoors, while Mike volunteered as chef at Camp BEL in Dorchester.

From his early years, Mike was a constant presence at the Russian Orthodox Church of Christ the Saviour, which was built by parishioners, including his parents. He sang in the choir, assisted in services, participated in events and gave generously of his time and resources. His faith sustained him through many challenges, and the friends he made there became his second family. His funeral service was led by Archpriest Vladimir Morin.

Mike is remembered as someone who would “give you the shirt off his back,” even if it meant going without. He always put his children first, teaching them life skills, values and multiculturalism. His generosity of spirit flowed through many lives for many years – and will be with us always.

The family thanks the staffs of St. Joseph’s Health Care and London Health Sciences Centre for their quality support and assistance. They are also grateful to Dr. Thomas Eberhard for going above and beyond the call of duty in caring for Michael over the past few years until the end. Those wishing to donate to a cause in memory of Michael might consider: Big Brothers Big Sisters of Oxford; Canadian Mental Health Association; Diabetes Canada; Canadian Cancer Society; or the Russian Orthodox Church of Christ The Saviour. Interment at Woodland Cemetery, London has taken place.