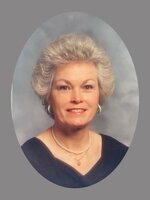 Dorothy “June” Bentley passed away peacefully on January 4, 2022 at the age of 86. The family is planning a Celebration of Life in the spring in lieu of a funeral service as per June’s wishes. June was a lovely woman who never had a bad thing to say about anyone. She avoided conflict of any kind and even on her most difficult days, she was pleasant to everyone in her universe. June was an avid golfer, winning several tournaments over the years and was especially proud of her three holes-in-one. June had a great appreciation for art, loved her plants and flowers and was a formidable opponent in card and board games of any kind. June was a devoted volunteer at St. Paul’s Cathedral where she worked on the Altar Guild and helped organize many of the annual book sales and the “Art in the Heart” artist shows. June is survived by her children, Wendy, John and Geordie; a stepson, Greg; a sister, Barb; grandchildren, Harrison, Magdalen, Julian, Micca, Clare, Venice, Beckett and Phoenix; six greatgrandchildren and many nieces and nephews.