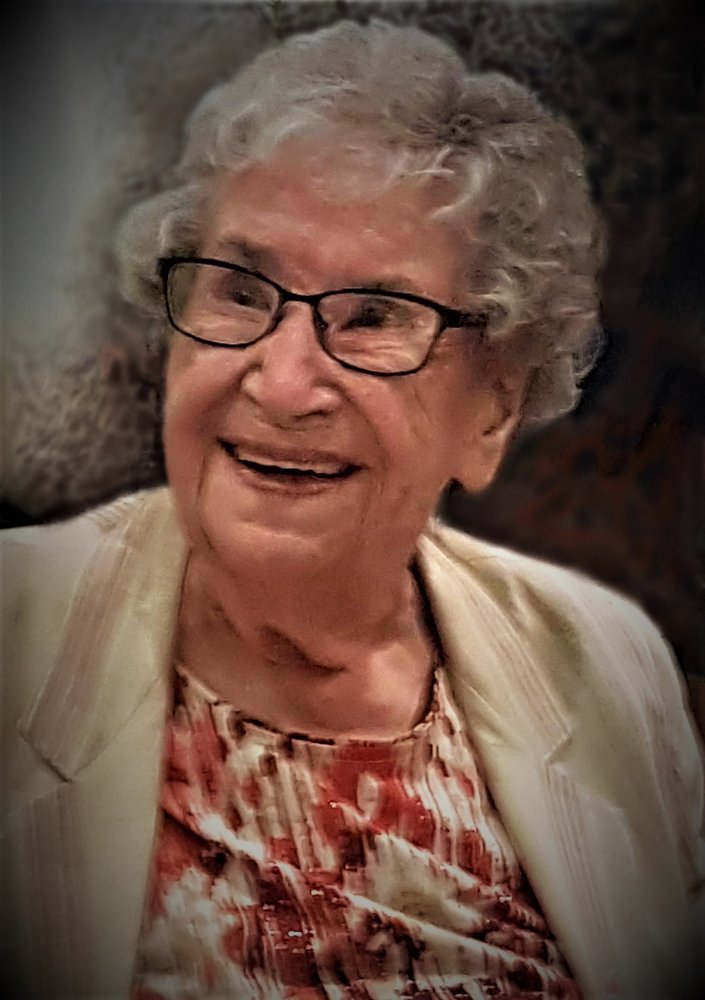 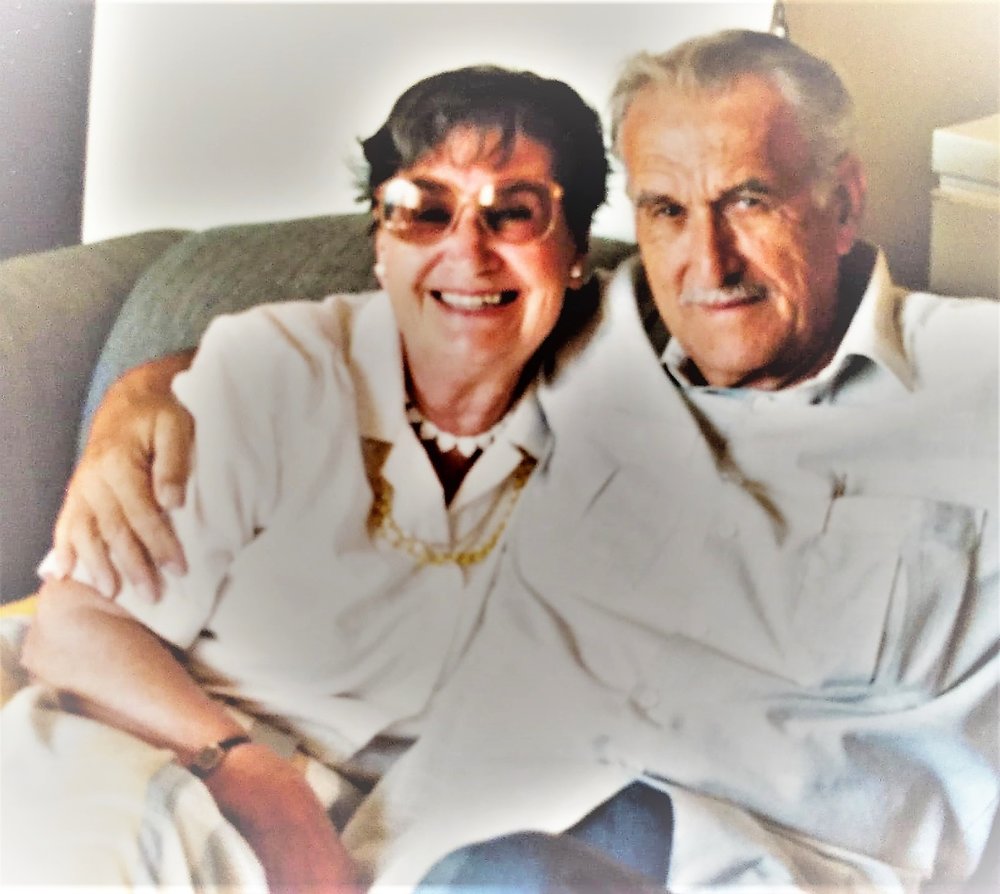 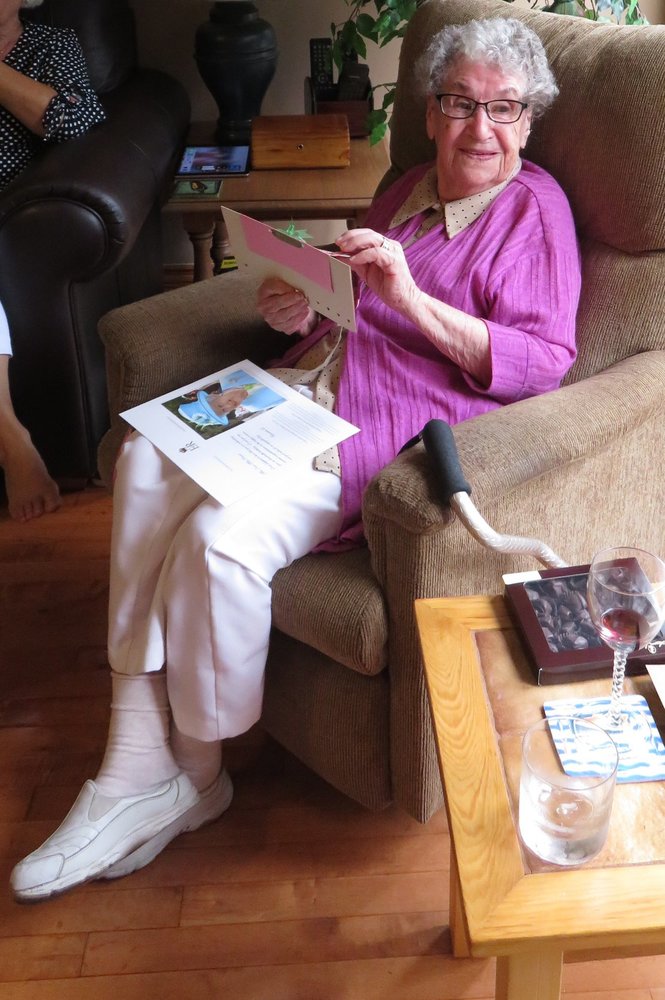 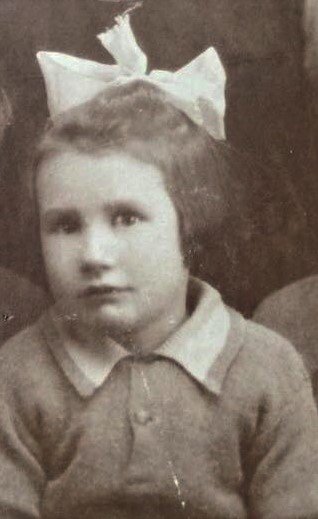 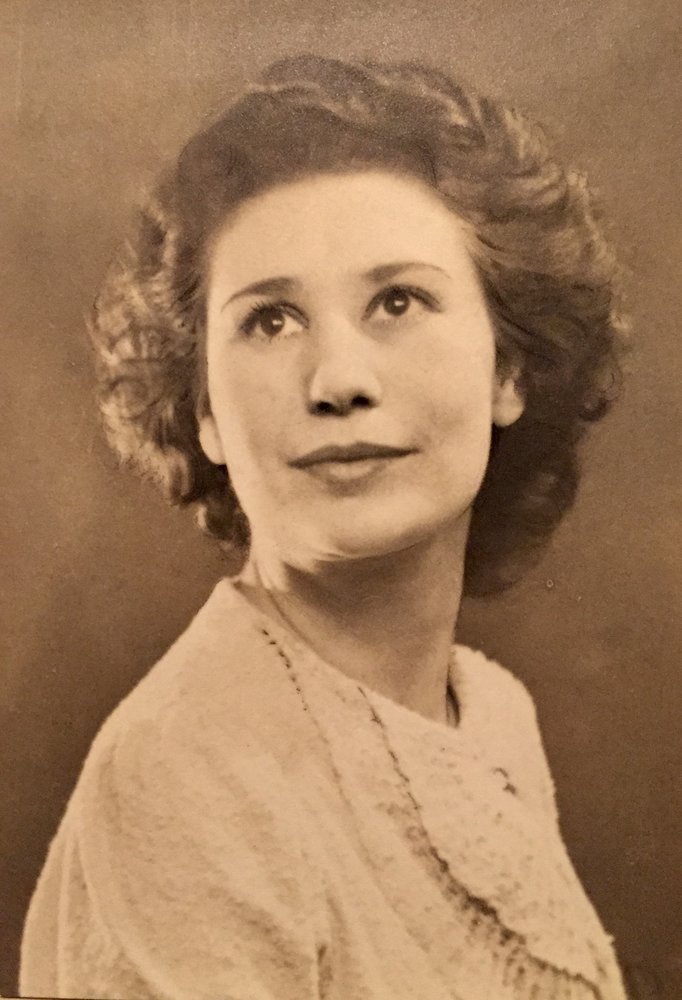 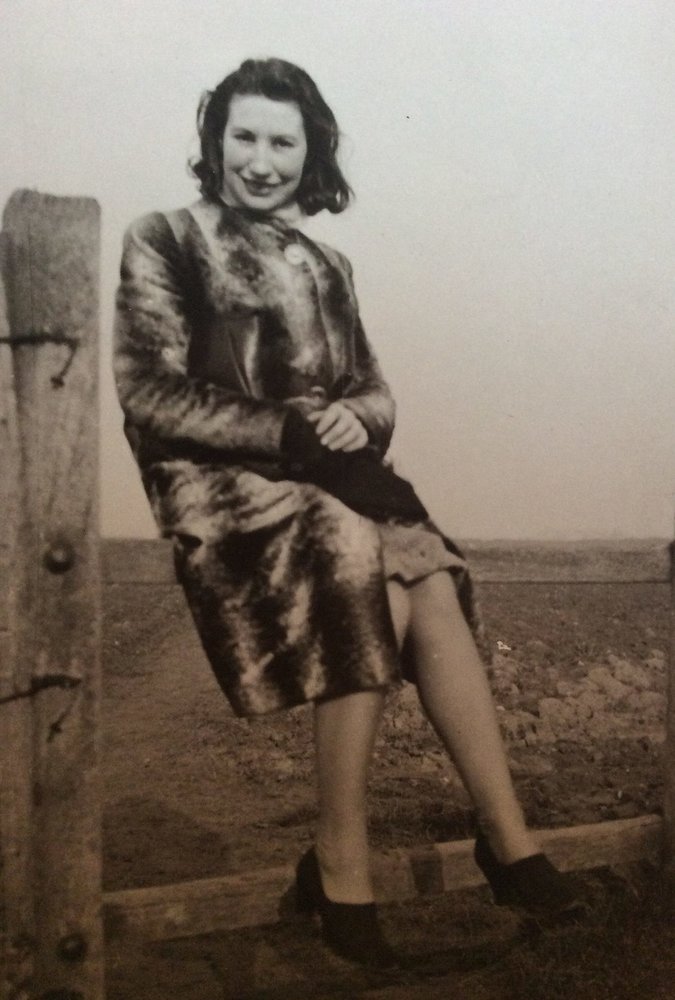 Peacefully, in her 102nd year, on Wednesday, August 19th, 2020, our beloved Mum, Grandmother, and Great-Grandmother, Joan Mary MacKenzie (nee Francis)  was called home by her Lord and Saviour Jesus Christ.

Joan was predeceased by her loving husband Don in 1994, her parents John & Elizabeth Francis and her dearly loved siblings; sister, Dorothy “Dorrie”, and brothers John “Jack”, Don, Robert “Bob”, and Gordon “Dick”, as well as many extended family members and friends. We are greatly comforted knowing that they are now reunited in Heaven.

Joan was born in the town of Guildford, Surrey, England on August 21st, 1918 to John & Elizabeth Francis. Shortly afterward, the young family settled in Leigh-on-Sea on the Thames Estuary. The family home on Cranleigh Drive featured prominently in many of Joan’s cherished childhood memories.

Joan loved to share stories of those years, from sneaking downstairs with sister Dorrie in the middle of the night to pinch some crackers from the pantry and then devouring them together under the bedsheets, to enjoying family picnics amoungst the ruins of Hadleigh Castle and the many lovely summer days spent watching Cricket. Joan loved to reveal that she was a “bit of a tomboy” and would gamely climb trees with her brothers, much to her parent’s chagrin.

Joan graduated from “Southend High School for Girls”, excelling in the arts and as  a proud member of the school’s field hockey team. This was followed by very formative years studying to obtain her fine arts degree from St. Martin’s School of Art  London, England, where she developed her remarkable artistic gifts and a lifelong passion for artistic expression in all it’s varied forms.

Joan’s artistic gifts were a source of great joy and passion throughout her life. Both to her, and to those whose lives she touched through her art. For Joan, there was absolutely no limit to an avenue for artistic expression. When asked “What is Art?” Joan’s reply was “If we can visualize religion as one’s search for spiritual truths, then art is one’s search for artistic truth also. My artistic search and expression compliments my spiritual journey.” Her oil & watercolour paintings, ink etchings, charcoal & pastel drawings, wood carvings, embroidery works, pottery and multi-media art pieces were one of the ways that she shared her gifts and made lasting connections with young and old alike.

During World War II, Joan worked for the British Admiralty and remembered well her interview and typing test in an office of the Admiralty Arch on The Mall. She was assigned to their offices in Bath, Somerset, where she was involved in monitoring warship movement, engagement and personnel. During this time, Joan found herself at a dance where she met and fell in love with a handsome young Canadian soldier, Donald “Don” Ross MacKenzie from Wallaceburg, Ontario. On a lovely sunny day in June, 1944, Joan and Don were married in All Saints Anglican Church, Witley, Surrey.

Joan and Don welcomed their first child, daughter Mary while still in England, before settling in Don’s hometown in Canada after the war. Daughter Laurie soon followed and they eventually moved to the family home on Chester Street in London, Ont. Joan rejoined the workforce in the late 1950’s, enjoying greatly her work as a ward clerk at the Westminster Veterans’ Hospital, providing long-term and acute care for veterans with physical and mental disabilities.

The 1962 arrival of youngest daughter Sarah provided another chapter for the “parenting” years. A move for Don’s career took the family out to Winnipeg in the late 1960’s. Many wonderful memories and friends were made in Winnipeg centered around their home on Fulham Avenue, and through their church, Westworth United. Joan enjoyed greatly expanding her artistic endeavours during these years, producing pieces for many art shows in Assiniboine Park and various other Winnipeg galleries.  She loved her many friends met at both her bowling league at Academy Uptown Lanes and while volunteering at the Misericordia Hospital where she provided the illustrations for a children’s book to welcome and ease the anxiety of children and their families during admission and treatment at the hospital.

Don and Joan retired back to London, Ont. in 1983 to their home on Panorama Crescent. Joan always loved puttering in her gardens, often finding inspiration in nature for her artworks. As a member of the Canadian Embroiderers’ Guild (London) she enjoyed thoroughly the exchange of creative ideas and fellowship shared.

One of life’s greatest joys for both Joan and Don was becoming grandparents to their 5 grandchildren. Summer vacations at the family cottage in Victoria Beach MB, family celebrations, gardening, nature walks, berry picking, beachcombing, art projects with Grandma and fishing with Grandpa are all treasured memories.

Pervading through all aspects of Joan’s life, was her Christian faith. Chalmers Presbyterian Church (London) has been Joan’s spiritual home for the past 30 + years. Her eager dedication to life and service was evident and inspiring.  For a number of years, the Minister would meet with Joan early in the week, sharing his sermon outline with her. She would then create an original artwork drawing based on the sermon that would be used for that Sunday’s Service Leaflet cover.

Joan delighted in receiving the blessing of her 8 Great-Grandchildren. She adored them and delighted in bringing out their creativity, or simply watching them experience something new to explore. Joan was an expert in seeing the world through a child’s eyes, always able to look at the world with wonder.

Joan was thrilled when in August, 2018, friends and family gathered to celebrate her 100th birthday! She was delighted with the congratulatory messages she received from Queen Elizabeth II and the Governor General of Canada, but her greatest joy was having all the family gathered together for a party, sharing remembrances, laughter, and simply enjoying each other’s company.

In recent years, Joan was welcomed into the loving and excellent care of assisted living at Ashwood Manor where she enjoyed her own little “apartment” surrounded by her art, family pictures, and her TV which provided hours of enjoyment watching her beloved Tennis, Wimbledon being her favourite.

Given the current pandemic situation, we were so grateful that following a brief hospital stay, Joan was given palliative care placement at the Parkwood Institute.  This allowed for Mum to have visits with her daughters Mary and Laurie. Truly a gift at the time of Joan’s passing was that her grand-daughter Heather was able to visit that day and was reading aloud from one of Joan’s favourite novels, “All Creatures Great & Small” by James Herriot. Joan passed into the arms of her loving Saviour very peacefully in the early evening hours.

We are so thankful for the compassionate care given to Joan by the staff of Ashwood Manor, Victoria Hospital and Parkwood Institute Palliative Care. A private family Memorial Service will take place at a later date with John Bannerman of Chalmers Presbyterian Church officiating.

To sign a book of condolences, please visit: www.woodlandcemetery.ca

Share Your Memory of
Joan
Upload Your Memory View All Memories
Be the first to upload a memory!