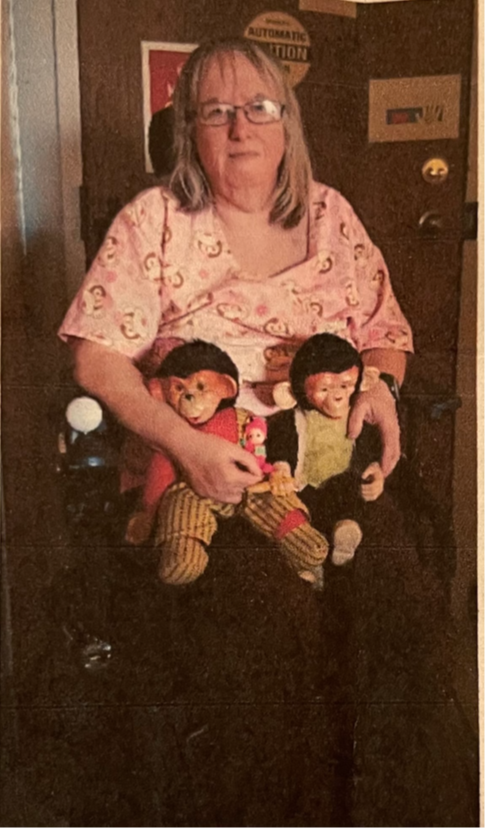 White, Brenda Jo Ann from London Ontario passed away peacefully in the early hours of July

“B” or “Auntie B”, as she was known, leaves behind her brothers Bill White (Gale), Wayne

well known cousins that Brenda kept up with; the foster children who had helped fill the

Vancouver to complete their education there; the Yoner family Brenda had become like family

and lifelong friends with when she lived in Regina, Saskatchewan for thirteen years, Brenda’s

Rogerson birth family members that she was in regular touch with, missionary friend Dianne

Estabrooks; and her homecare worker, Andrea McKenzie who, in the seven years she had

lovingly served Brenda, had become a true and trusted friend.

throughout the life limiting health problems that came her way. Like when her youngest brother,

Brian, witnessed her sounding out the word “Philcoe” on their refrigerator it became a lifelong

point of humour between them. Christmas cards to Brian were signed “to Philcoe” and her

with the 100 day countdown and wondering what Brenda was going to come up with this year!

One year among her unique and thoughtful gifts, it was chocolate covered bugs!

Brenda was an organizer who liked to organize fun things, like the Animal theme party she held

for the kids at her Nan’s place in London, Ontario. Everyone had to wear a T-shirt with an

animal on it, and, as always, there were lots of fun and games for the children.

Brenda loved monkeys and what could be more fun than that! She had hundreds of stuffed

ones, and she had access to a live one. Thus, she was buried with her two longtime favourite

where she had recently celebrated a record 2000 sessions. Her tombstone bears a picture of

her holding her beloved live monkey.

Brenda also loved machines and had a lot of fun with them. She loved her VW Beatle that had

been passed along to her, in which she had installed a shortwave radio that she had a blast

with, using her “handle” to communicate with all the truckers on the road.

Next, she loved her computer that soon became overloaded with all the genealogy and biblical

work she was doing. Brenda’s first beloved instrument had been the piano, but now it was the

She loved the power scooters that became necessary when her legs gave out. She

desktop that could go up and down from a standing to a sitting position.

allowing the Son to direct my destiny each day. Whether it be here at home, or at the hospital I

try to bless someone each day with a blessing of thanks, a smile or even a chuckle.”

There will be a Celebration of Life Service for Brenda to follow in a couple of months, burial has

Please feel free to post photos that you may have of Brenda.

To send flowers to the family or plant a tree in memory of Brenda White, please visit Tribute Store
Thursday
15
July