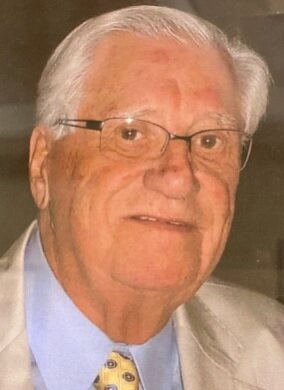 Jack was born in Ottawa, Ontario and after completing his post secondary school education, started a career as a Chartered Accountant in Perth, Ontario. This took Jack and family to Sudbury, Washington DC and finally London, Ontario where they settled in 1968. Jack then began a career as the Superintendent of Business for the London District School Board, a position he held for over twenty five years. Jack retired from the Board in 1994. Jack was a long time member of the Salvation Army London Citadel, the Forest City Kiwanis Club and was a past President of the Ontario Association of School Business Officials (OASBO). Jack was also a past President of the Association of School Business Officials (ASBO) International, and was the first Canadian elected to that position. Jack was very proud of all of his accomplishments with those organizations as well as the relationships he cultivated over the years. Jack and Betty travelled extensively. They spent many years at their winter home in Clearwater, Florida. Jack loved his computer and was a huge fan of the Detroit Tigers and his favourite player, Jack Morris!

A special thank you to Jack’s nephew Geoffrey Linklater and his spouse Laurie Hamilton of Ottawa for all the special kindness during Jack’s final years. A celebration of Jack’s life will take place in London, Ontario early in the new year on a date yet to be determined. Jack, you will be forever missed. Donations to the St. Joseph's Hospice London are greatly appreciated. (https://www.sjhospicelondon.com/donate-now)

Share Your Memory of
John
Upload Your Memory View All Memories
Be the first to upload a memory!
Share A Memory